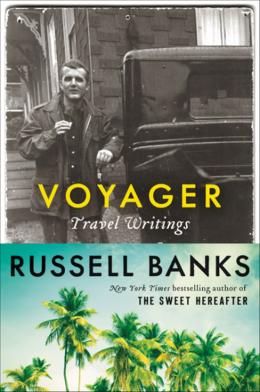 The acclaimed, award-winning novelist takes us on some of his most memorable journeys in this revelatory collection of travel essays that spans the globe, from the Caribbean to Scotland to the Himalayas. Now in his mid-seventies, Russell Banks has indulged his wanderlust for more than half a century. “Since childhood, I’ve longed for escape, for rejuvenation, for wealth untold, for erotic and narcotic and sybaritic fresh starts, for high romance, mystery, and intrigue,” he writes in this compelling anthology. The longing for escape has taken him from the “bright green islands and turquoise seas” of the Caribbean islands to peaks in the Himalayas, the Andes, and beyond. In Voyager, Russell Banks, a lifelong explorer, shares highlights from his travels: interviewing Fidel Castro in Cuba; motoring to a hippie reunion with college friends in Chapel Hill, North Carolina; eloping to Edinburgh, with his fourth wife, Chase; driving a sunset orange metallic Hummer down Alaska’s Seward Highway. In each of these remarkable essays, Banks considers his life and the world. In Everglades National Park this “perfect place to time-travel,” he traces his own timeline. “I keep going back, and with increasingly clarity I see more of the place and more of my past selves. And more of the past of the planet as well.” Recalling his trips to the Caribbean in the title essay, “Voyager,” Banks dissects his relationships with the four women who would become his wives. In the Himalayas, he embarks on a d