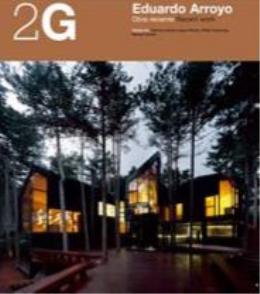 In recent years the Madrid school has gone through a renewal that is generating an architecture which is especially interested in what is done on the other side of the Spanish frontier. Without losing sight of a rich local tradition, the many different architecture studios of Madrid -like Ábalos and Herreros, Tuñón and Mansilla, Soriano and Palacios, Cero9, Acebo and Alonso, Aranguren and Gallegos, Nieto and Sobejano- are displaying a much fresher and more active approach in terms of defining new advances for contemporary Spanish architecture than their compatriots of the Barcelona School. As part of this, Eduardo Arroyo and the members of the Madrid studio no.mad arquitectos occupy an important place within the new Spanish architecture. Despite having built very little (a day nursery in Sondika, a square and a stadium in Barakaldo, and a single-family house on the outskirts of Madrid), Eduardo Arroyo is a key figure for understanding the new directions that not only Spanish, but also European, architecture is taking. This new 41st issue of the magazine 2G presents all his studio’s built work and some of its more recent projects, a total oeuvre that moves between the fiercest pragmatism and rigour, a playful geometry, the value of architecture as part of the landscape, and constructional responsibility.